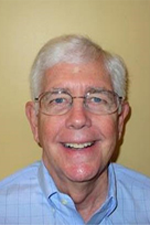 As a retired banker, Art spent the majority of his career as an Executive involved in International and Middle Market Commercial Lending. He started with the International Department of Bank of America in San Francisco and Chicago. Later he spent a number of years with the California operation of The Bank of Tokyo. The majority of the business was international and involved extensive travel to Japan, Hong Kong and Korea. He has a BS in Economics from Purdue.  After serving in the US Army, Art received an MBA in International Business and Finance from Indiana University.