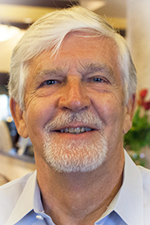 Bill was born in Scotland and spent his first 44 years in Europe. After graduating from Edinburgh University, he was a researcher in its Microelectronics Institute where holds a PhD in Microelectronics. In this period he traveled extensively in the Middle East and Africa, living in Istanbul for 2 years. 1977 He founded and was CEO of a silicon design company in England. Ten years later he joined STMicroelectronics and moved to the USA where he managed International R&D and business units. Bill retired in 2006 to the Pacific Northwest. Bill’s interests are photography, travel and international affairs. In 2014, after grandchildren were born in NY, he and his wife Vanessa moved to Naples.